LAWRENCE — Until this fall, Hailey Solomon had never been to a college football game. She doesn’t expect to attend another one anytime soon. And the game she did attend? She only stuck around for a quarter or so. 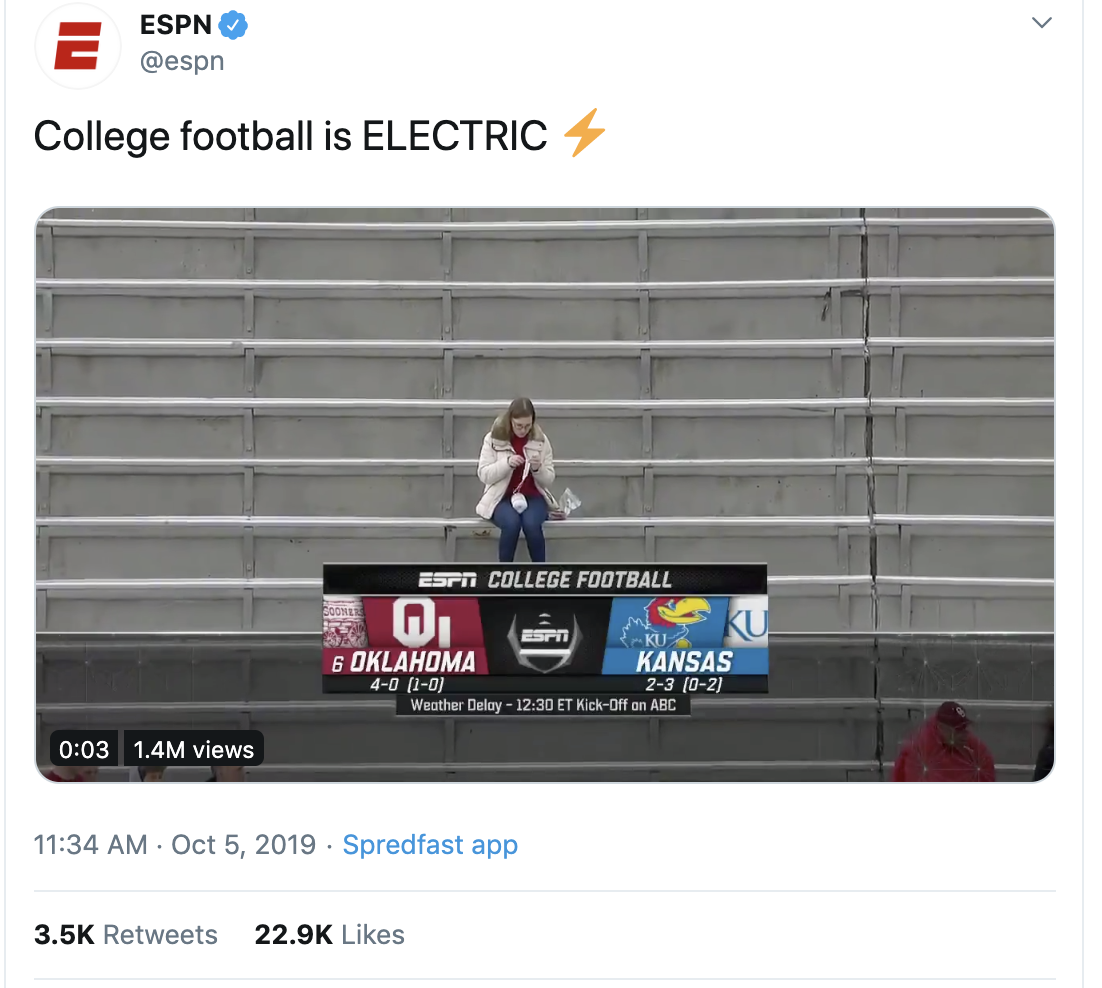 That was all it took to make her a viral sensation.

Solomon, a University of Kansas senior in civil engineering from Oswego, was caught by ABC’s cameras during a rain delay during the KU-Oklahoma game Oct. 5. She sat alone, crocheting. Video of her unexpected cameo quickly rocketed around the internet, journalists tracked her down, and she was featured within days on the websites of national publications like People Magazine and The Athletic.

“Not all heroes wear capes,” a Minneapolis radio station declared on Twitter.

After the hubbub started to die down, Solomon was amused by the attention — and trying to keep it all in perspective.

“I don’t know if I’d call it fame, but it’s a popular story right now,” she said.

Solomon, in fact, was at the game for purely academic reasons. Matt O’Reilly, an associate professor in the Department of Civil, Environmental and Architectural Engineering, was being honored by KU’s senior class with the 2019 H.O.P.E. Award, which honors an “outstanding progressive educator.” Solomon — who has worked with O’Reilly as an advisee, student and research lab employee — nominated him for the award and was on hand to see him receive it.

“I didn’t have any interest in the game,” she said. “I just wanted to support Doctor Matt. They caught me.”

Solomon said O’Reilly encouraged her soon after she arrived at KU and quickly became overwhelmed by the demands of the engineering program.

“You can absolutely be successful in engineering because engineering, like everything, is so much more than it appears,” he told her. “It’s not just math and science; it’s writing, communication, teamwork, design and so much more. You can't judge yourself based on what you're not; otherwise, you'll never accomplish anything. You have to make decisions based on what you're good at and get help with the rest.”

Solomon wrote of that moment in her award nomination. “This advice has stuck with me,” she said, “and I know it will continue to impact me for the rest of my life.” 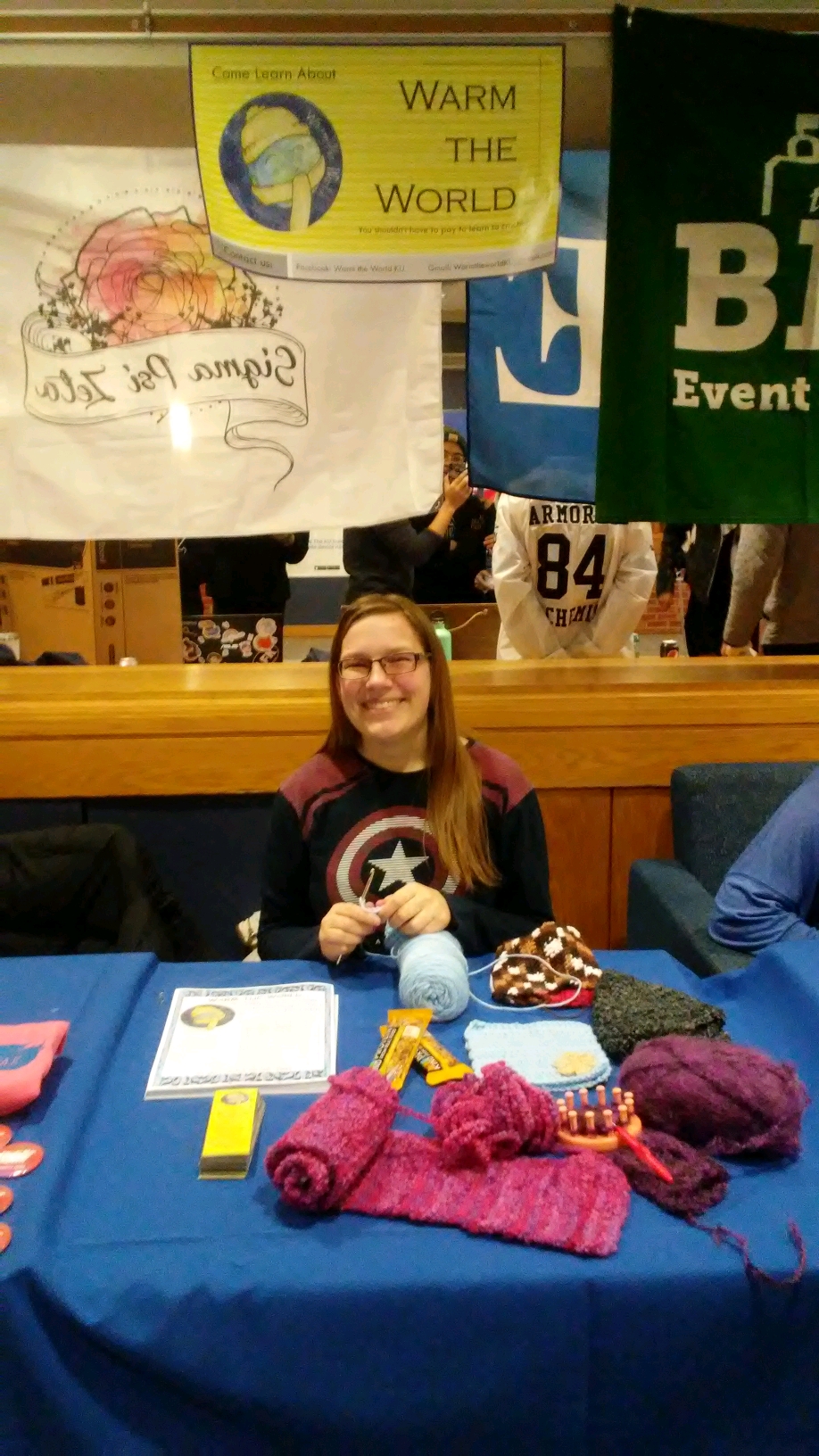 After the game, she added: “You can go in any time during the day and he’ll drop what he’s doing to help you. He treats everyone around him with genuine kindness and genuine concern. I’m really thankful for that.”

O’Reilly was honored during the game, and Solomon headed home soon after he was recognized. That’s when she found out that she was becoming Internet Famous.

“When I got home, and my sister texted me: ‘Hailey is this you?’” Solomon said. “She sent me an article. Everything blew up from there.”

Twitter users might have been amused, but crochet is an important part of Solomon’s life. She is a co-founder of KU’s Warm the World, a club that teaches attendees to knit and crochet, and which donates all the handcrafted items to the homeless. When the cameras found her, she said, “I was making a potholder for my lab coordinator.”

Solomon said she expected her moment of viral fame to pass quickly.

“I’m really grateful if a 30-second video of me crocheting brings people joy, but I still have my life to live and work to do,” she said. “I can’t let it change my perspective.”

But there probably aren’t many football games in her future.

“Nothing about this experience has changed my ability to understand football,” she said. “I’ll keep crocheting, but not at a football game.”